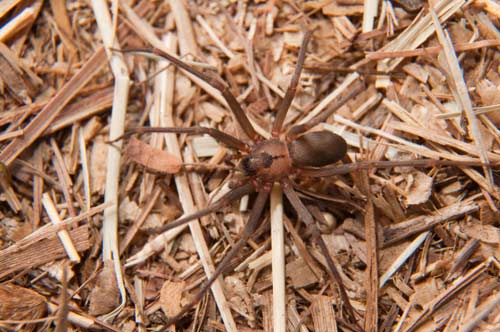 This spider exists, but is far less menacing than our urban legends promote.

The Violin Spider is one of several species of spiders in a group called Loxosceles, and they are characterized by a rather distinct “violin” shaped marking on the top of their thorax. This also gives them another common name of “fiddle back” spiders, and the most notorious of the group, Loxosceles reclusa, also goes by the name of the Brown Recluse Spider. This describes the habit it has of hiding when possible, hunting for food at night by wandering around the structure and hiding in the daytime.

Many other kinds of spiders are similar in appearance. They may be the same size, brown, long legged, and even have the vague outline of a violin on top.

However, the one way you absolutely can identify the Violin Spiders is by using a magnifying glass and looking at their eyes. They have six of them, arranged in 3 pairs in an arc across the front of their head. No other kinds of spiders have eyes arranged in this manner.