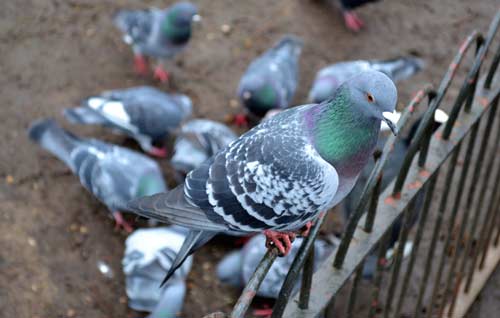 The feral pigeon is the number one urban pest bird. Large numbers exist in every city across the country. Not a native bird, feral pigeons are descendants of domestic homing pigeons brought over from Europe and released here in the 1600s. The Romans domesticated them from the wild rock doves from the sea cliffs of Europe over two thousand years ago.

Several traits have allowed them to dominate the urban landscape. Because of their history, pigeons are not afraid of people; they roost and nest readily in man-made structures and they have a diverse diet . Although primarily seed or grain eaters, in urban areas pigeons feed on garbage, spilled grains, food left out by outdoor diners, and food provided by bird lovers who intentionally feed pigeons bread, peanuts, and cookie crumbs.

Pigeons are gregarious and feed, roost and loaf in each other’s company wherever possible. As you are aware, pigeon droppings may deface and slowly deteriorate the surfaces and exposed structures of buildings as well mark or etch the metal of vehicles. Primarily the acidic secretions within the droppings and their corrosive effects cause this.

Birds are also the cause of many diseases of humans and domestic animals. In fact, more than 60 transmittable diseases are associated with pigeons, starlings and sparrows. Accumulating and decaying bird droppings create offensive odors and attract a wide variety of flies and other disease carrying insects. 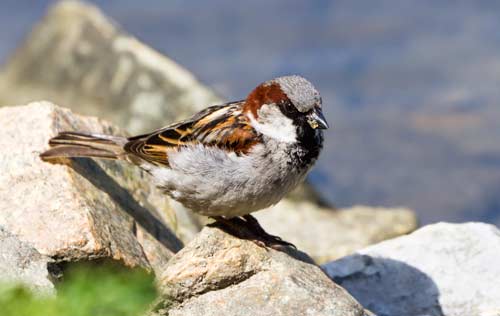 The House sparrow is the number two urban pest bird. Introduced as a species to North America , the house sparrow quickly spread across the country due to its lack of natural enemies and its adaptive traits. Its ability to nest in urban structures, eat urban scraps and a large breeding capacity are some of these adaptive traits.

The House Sparrow is actually a member of the weaverbird family and not a true Sparrow. Weaverbirds create intricate nests and relative to their size, the largest nests in the bird world. Their legs and toes are favored for branch perching and their short conical bills are ideal for seed cracking. Their diet consists of seeds and grain, as well as fruits, vegetables, human table scraps and insects. They are boisterous, intelligent birds who roost in noisy flocks on branches of city trees, ivy covered walls and under eaves of houses.

House Sparrows are often a nuisance in urban areas like manufacturing and food processing plants. Sparrows can be very frustating for Grocery stores as once they come in, they are difficult to remove and the local Health Department doesn’t like bird poop on the vegetables.

Debugger Pest Control specializes in trapping and removing sparrows from the inside of buildings. Gutters and drainage pipes clogged with sparrow nests can backup and cause extensive water damage and fires have been attributed to electrical shorts caused by machinery housing sparrow nests. Lastly, feces buildup can lead to structural damage from the uric acid in droppings, plus the bacteria, fungal agents and parasites in the feces also pose a health risk. House sparrows only mate for a season. They average three broods per mating season with each brood containing four to seven eggs with 20 offspring a year average. If unchecked, a breeding pair can grow to over 2,000 birds in two to three years. 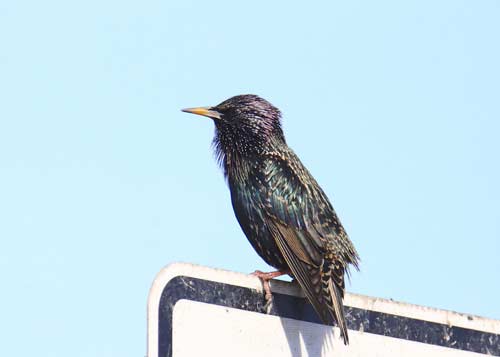 Like the house sparrow, the starling was introduced from Europe in the 19th century. It did not spread as fast and only reached the western coast within the last few decades.

Starlings are well adapted to urban lives which offer it an abundance of food and nesting sites. It is a muscular bird about eight inches long with long wings and a short squared tail. Starlings are very aggressive and will drive native birds out of their territory, much to the dismay of local bird watchers.

Starlings are well noted for their flocking habits. They often gather in the tens of thousands, creating a nuisance when roosting in populated areas

Starlings rank just behind pigeons and sparrows as an urban bird pest. Starlings can be a nuisance in both urban and rural areas due to their nesting, eating and living habits.

When the bird is in its flocking phase, thousands of starlings often overwhelm buildings and trees. Large scale buildup of feces from these flocks can lead to structural damage. The uric acid in the feces can corrode stone, metal and masonry. Gutters and drainage pipes clogged with starling nests often backup, causing extensive water damage. The bacteria, fungal agents and parasites in the feces also pose a health risk. 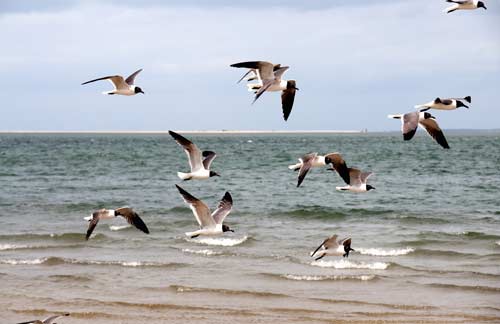 Gulls and other related sea birds exist in great numbers along coastal areas, large lakes and rivers. A subset of long winged swimming birds, there are 45 species of Gulls. Twenty species are resident (nesting) in North America and four are visitors (non-nesting). An intelligent bird, they will carry mussels and clams high in the air and drop them on hard surfaces to get to the soft meat inside.

Gulls have the ability to drink saltwater and freshwater, thanks to a pair of salt removing glands above their nostrils. They are good swimmers who can walk or run agilely on land. Gulls are scavenging birds; they will eat everything from dead fish and garbage to field mice and insects. Gulls enjoy protection at the federal, state and local levels.

Gulls can be a nuisance in coastal areas, particularly at dump sites, piers and harbors. Flocks of gulls often create hazardous conditions to low flying aircraft. Large buildup of droppings will lead to structural damage from the uric acid. Boats, streetlights and buildings are just a few of the items damaged from excessive gull droppings. Furthermore, their droppings can also pose a health risk. 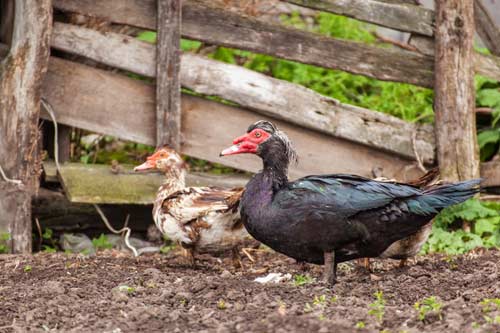 By definition, most native duck species are not classified as pest birds and are afforded protection by Federal & State agencies. However, Muscovy Ducks are not protected and often pose tremendous problems in residential settings. These ducks are increasingly becoming the scourge of suburbia as their numbers have grown in the past decade from only a few thousand to hundreds of thousands of these birds. Country Clubs, business parks, planned residential neighborhoods offer pristinely manicured lawns and ponds providing an ideal habitat.

Ducks can cause damage to agricultural crops year round, either by trampling or consumption. Aesthetic damage to suburban lawns, golf courses, etc., is incalculable. Ducks are also a health hazard fouling reservoirs and ponds. A larger threat is air safety. Ducks and Geese are one of the main birds involved in airline bird strikes worldwide.

There are very few effective methods to remove them short of trapping and removal. The numerous visual scare products like Flash Tape, Scare Streamers or Noise Makers or even repellant products such as ReJeX-iTtaste deterrent are generally ineffective.

Nesting sites are typically near water with protective vegetation in close proximity. Shrubbery near the ponds, or residents yards make ideal nesting grounds. Ducks may be extremely aggressive, posting sentinels at nesting and grazing sites. Defense of nests can many times result in injury to people or pets who venture too close.